"No! There's been too much destruction! It was a mistake for me to compete. And it would be a mistake to let Twisted Metal continue! ...I want to remove violence from the world!"
—Axel, Twisted Metal: Head-On

Axel is a character from the Twisted Metal series. He drives a two-wheeled contraption throughout the series. The vehicle itself is named after him.

A prisoner in his own vehicle, Axel has roamed the world looking for an escape. A noble man pushed to the brink, Axel will destroy anyone who prevents his quest for freedom. But true freedom means confronting the man who placed him in the machine.

"For 20 years, I've been stuck in this hellish contraption, hiding and waiting for the day when I would be brave enough to fight back. If I win, I'm confronting the man who did this to me. I promise you, I won't be a freak forever."

Wish: To get revenge on the person who put him in the contraption.

When Axel was a boy, his father strapped two giant wheels to his son's arms and legs. For twenty years, Axel has lived a tormented life filled with daily retread and challenging trips to the bathroom. He's back to win Twisted Metal and become one with his machine forever.

"Many years ago, my father forced me into this terrible machine. When I finally freed myself, I was permanently disfigured. My torment was not over. I'm climbing back into my machine one last time. When I win I'll finally be free!"

Wish: To become one with his machine. 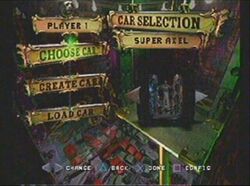 Axel returns in Twisted Metal 4 as Super Axel, a metallic-armored version with a spike on the outer side of each tire. He is the boss of Amazonia 3000 B.C. He can be unlocked by completing Tournament mode or inputting ↑ → ↓ ↑ L1 at the Password screen. The identity of it's driver is most likely Axel once again.

Note: This ending is shared with all other boss vehicles of the game as well as custom vehicles.

Axel's wife was murdered when he wasn't even looking. One moment he was the happiest man in the world, only to have his optimism brutally stabbed, strangled, and stomped under the feet of a great evil. Crippled by depression going nowhere, Axel can only hope to win this mysterious contest. But will he have the courage to face his wife's killer?

Treatment: Note to staff: DO NOT attempt to treat, lost cause.

Wish: Avenge the death of his wife.

Fueled by pain and anger, Axel builds the two-wheeled death machine for penance. He straps himself between the giant wheels to punish himself for the death of his wife. His guilt is eased each time his bare feet are shredded along the ground. Axel's Special Attack lets loose an electrified ring to damage nearby opponents.

Axel is looking for the person who killed his wife. He feels responsible for her death and feels revenge is the only sense of closure he will get. So he enters a contest hosted by Calypso who said that he will reveal the killer.

Unveiled in a deleted ending, Axel is the kid in the wheelchair that Calypso kicks down the hill in the intro cutscene of TM:SB. His wish at the end was to walk again. He is unlocked on the level Playground Peril by shooting the middle swing and collecting the icon.

Axel is usually known for having average stats in all categories. In TM:SB, Axel is noted for having moderate armor and somewhat low acceleration and top speed. However, he has absolutely exceptional turning.

Special Weapon: Axel first fires a single missile, when hit by an enemy, He spins wildly, while firing the same missiles to the targeted enemy. 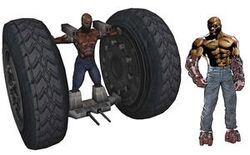 Weight: 280 (An extra 60 is contributed by his arm and leg augmentations)

It’s been over 10 years ever since Axel's father incarcerated him inside a two wheeled machine. Finally going against his father, Axel in defiance tore his arms free from the contraption only to find later that he was incapable of living without it. He came across Dr. Zemu, who created cybernetic limbs for his arms and feet that would allow him to be able to pilot his vehicle once again. However, there was one thing Axel had to do in return. Should he win the Twisted Metal Tournament, Axel must turn his wish over to the Dr. Zemu.

Axel is an unlockable vehicle in Head-On, where he is obtained after completing the Shooting Gallery minigame in Russia.

Axel is still aching over the murder of his wife. Feeling her death was his fault, he chooses to stay strapped to the wheels, his feet dragging against hot asphalt, ripped apart, bleeding, and causing him tremendous pain. One day he hopes he will have done his penance and the spirit of his wife will forgive him.

Axel's new primary special, "Spiked War Wheel", is similar to the secret special in Twisted Metal: Black, conjoining both wheels into one with protruding spikes. The special will hide the player in a spinning wheel of death, which can be steered into opponents for significant damage. The secondary special is the classic shockwave that can knock back enemies caught in the blast radius.

Axel also has a unique trait of being able to jump higher than any other vehicle in the game. This perk comes with a price, however: Axel has fairly low armor and slow special regeneration.