Club Kid is a vehicle and contestant who appears only in Twisted Metal III.

Club Kid is the ultimate raver who spends his nights partying and his mornings washing down cocktail weenie breakfasts with warm powdered milk. He usually wears the same clothes for weeks because when you're rushing from club to club, who really has the time to change? Club Kid drives a tiny, nimble micro car emblazoned with a misleading yellow happy faces on its hood. His vehicle sports a nifty weapon called the Vortex, a psychedelic whirlwind that sucks cars in and spits them out after it reaches terminal velocity. Club Kid thinks it's way cool Rob Zombie kicked in some tracks for Twisted Metal III.

"I'm crashing Calypso's twisted party with my mighty disco ball and my smilin' stylin' micro car. No one at this shindig stands a chance once I cruise my way into that fly blimp. There'd better be some egg nog at my winner's bash! See you at the Mosh Pit!" 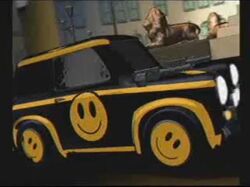 Retrieved from "https://twistedmetal.fandom.com/wiki/Club_Kid?oldid=25583"
Community content is available under CC-BY-SA unless otherwise noted.