A massive vehicle with awesome power but slow acceleration.

A ravenous creature who wants to get back what is rightfully his. He's hoping Calypso gives back Black!

A white hot laser beam forged in the fires of hell! Although it is particularly weak, it has a cool sound effect.

Darkside would have appeared in Twisted Metal 2 as a stage boss, but the truck was dropped from the game for unknown reasons. It would have had a flatbed for what would have been the only time in any of its appearances. It can still be seen in the background of the options menu. It had an original driver, Granny Dark.

Darkside reappears in Twisted Metal III. It is an unplayable boss this time, though it is easily playable with a cheat device. Darkside can be selected only with GameShark, with the code: 800D28D0 O0OE. Its special is similar to Minion; both shoot a freeze missile, except Darkside launches a flamethrower while Minion launches 3 missiles.

The vehicle Dollface has chosen to use in the contest is a semi-truck she calls Darkside. It was hijacked from the truck driver Dollface hitched a ride from. This armored behemoth is perfect to ram through opponents with a sirenless police car acting as a bumper. When firing the Special Attack, Darkside accelerates to breakneck speed and crashes through anything in its way. Take note that the Special Attack can be rear-fired as well. Plus, ramming an opponent into a wall or "T-sliding" into an opponent will cause greater damage.

Darkside appears as an unlockable vehicle; it is once again a Peterbilt 379. Except, it is blue instead of black. The special, a powerful ram, is meant to destroy opponents in a few hits. Darkside can be unlocked at Easy Death Oven by firing a Napalm at the plumber's butt. Go under it and collect the icon.

It has the best armor in the game after bosses Trapper and Piecemeal.

Special Weapon: Ramming into his opponents with great force.

Darkside, with the same design as in Black, appears once again driven by Dollface.

Choosing to stay locked in her doll mask, this once young girl has become a young woman. While her body and skull grow bigger, the mask does not yield. The crushing pressure on her brain has begun to take its toll.

Darkside is a returning vehicle in this game, and is still a black semi truck. It is unlocked after beating Iron Maiden in Mr. Grimm’s Story.

The vehicle's special weapon is very similar to the one in Twisted Metal: Black, in that Darkside will accelerate and ram into vehicles. Additionally, Darkside can rear-fire the special to drop mines from behind the truck. The secondary special raises a tri-mini gun that can rotate in a 360 degree circle.

A new feature found in Darkside's Primary special is labeled as "Double Turbo Slam." If you have a SIXAXIS compatible controller, you are capable of performing this. While charging at an opponent, flick the controller and then activate the Special. (Do not do both at the same time. You must activate the extra turbo boost before the special, otherwise it will not work.) This deals in between 10-30 more damage (Ranging the attack from 45 Points Damage to 78 Points Damage). 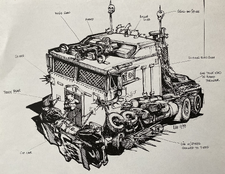