"I don't think I like the man I'm turning out to be."
—John Doe, Twisted Metal: Black

John Doe makes appearance in Twisted Metal: Black and Twisted Metal: Lost as the driver of Roadkill. He is a mysterious character, as his story is him trying to figure out who he was. His true name is never revealed.

John Doe can't remember who he is, what he did, or whom he did it to. The only thing he knows is that his body is covered in tattoos that could possibly reveal the past to him, but it doesn't help much. John sometimes suffers from the fury of being lost in his own existence. One day he's going to discover the truth... but will he like what he finds?

Wish: Remember his past.

John Doe was once in a gang of look-a-like thugs, low-life nobodies that that got by with random beatings and robbery. Determined to become well-known, the gang devised a plan: detonate a powerful bomb in the Midtown Center for Disease Control building, potentially spreading numerous diseases around the world. However, something happened to John which caused him to acquire amnesia, and he was sent to Blackfield Asylum afterwards. For a length of time, John and the doctors at the asylum were at a loss; no one could figure out who he was. One day, John gets a visitor, a man going by the name Calypso, who makes John an offer. If John competes in his contest, Calypso can show him the truth about who he truly is. He then shows John a picture of himself in a suit; nice and neat, like he's actually somebody. Determined to find out who he is, John enters the contest, tired of spending the rest of life as a nobody. 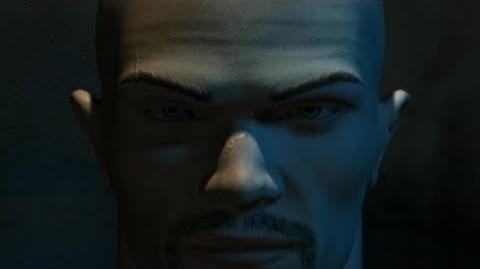 John went to Calypso to claim his prize, to finally know who he was. Calypso tosses John a wallet, containing an I.D. that reveals that John was an undercover FBI agent trying to take down a cult hellbent on destroying the world. After the cult planted the bomb in the CDC building and left, John rushed back inside to dismantle it. But due to a lack of time and desperation, he threw it outside through a nearby window. The force of the explosion knocked John back against a wall, causing him to black out and lose his memory. John's pride of his heroic actions are soon greeted with horror when he remembers that Calypso is number two on the FBI's Ten Most Wanted list. Calypso then points a handgun at John, thanks him for participating, and bids him farewell before shooting him multiple times in the chest. In his last dying moments, John remembers that he has a family consisting of a wife and two kids.

An undercover cop trying to bring down the Twisted Metal contest. The original John Doe was killed by Calypso at the end of Twisted Metal: Black™. Rumor is, Midtown P.D. has a whole team of John Does, all with the same mission: take down Calypso.

John Doe has returned for Twisted Metal: Lost, but, as stated in his bio, he is not the real John, who was executed by Calypso in his ending for Twisted Metal: Black. It is said that the Midtown FBI have an entire team of John Does, all with the same mission: to hunt down and kill Calypso. This means that this John Doe in the tournament is a duplicate behind the wheel of an identical vehicle.