Billy Ray's vehicle, the Junkyard Dog, is a run-down tow truck that helps him earn a second income. At night, along the country road, he tows stranded motorists to the local mechanic for repairs. Its Special Attack is a flaming spiked ball that dangles from the truck's tow arm, and is similar to the Gas Can, but more powerful. Press the Fire Weapon button once to hurl it and a second time to bring it down upon the targeting reticle.

At the end of Twisted Metal: Black, Billy Ray embarked on his life's ambition: to outdo Sweet Tooth as midtown's most notorious serial killer. It's been almost 10 years since that vow, and he has yet to kill another soul. Until tonight...

Junkyard Dog is a returning vehicle featured in Twisted Metal (2012). Junkyard Dog's primary special, "Taxi Toss" launches a homing taxi into enemies from behind using the tow winch, complete with the taxi driver trapped inside. Yes, you read that correctly: this vehicle's special lets you throw a taxicab at your enemies! The taxi can also be dropped from behind like a mine and will explode when struck. The alternate special, "Taxi Detonation", functions similarly to the Remote Bomb and can be launched or dropped in the environment. Let the taxi cook long enough and it will send out a shockwave upon detonation, which will damage everyone caught in the blast radius. 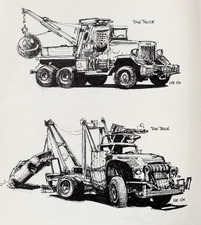 Concept of a mix between a pickup design and a tow truck. 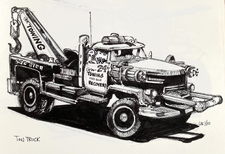 Concept of Junkyard Dog much closer to its final design.
Community content is available under CC-BY-SA unless otherwise noted.
Advertisement