Mature
Twisted Metal (sometimes referred to as "Twisted Metal PS3") is a vehicular combat video game developed by Eat Sleep Play and published by Sony Computer Entertainment exclusively for the PlayStation 3 game console. It is the eighth installment in the series. The game was released on February 14th, 2012 (Valentine's Day) in North America and March 16th, 2012 in Europe. It was originally set for release on October 4th, 2011, but was pushed back in order to fine tune and polish the game. The game is rated M for Mature by the ESRB due to the graphic nature of the cut scenes and harsh language. David Jaffe, the head designer of this game, targeted the T rating for the game, but decided to embrace the M rating.

Players compete in Calypso's tournament in order to earn their prize. There are only three playable characters in the campaign - Sweet Tooth, Mr. Grimm, and Krista Sparks/Dollface - but each can use any vehicle. It was once stated that each character would have 3 different endings depending on the difficulty, but it has been revealed that it will not be included in the final version.

Story Mode - Each character will have their own different storylines. For the instance, Sweet Tooth has a Deathmatch in level 1, Mr. Grimm has a Juggernaut Deathmatch in level 1, and Dollface has an Endurance challenge in level 1. Everyone will have different things to do in their story, unlike the other games in which everyone has to go in the same order doing the same thing. Each character will have a beginning, a middle, and an end movie. Each level will have 3 collectable medals (not to be confused with trophies); bronze, silver, and gold.

Challenge Mode -  This mode is a single battle, as opposed to a set progression of levels. You choose your Battleground/Level Variant, with options such as AI Bot number, and activation of Health Semi, Pedestrians, and/or Traffic within the level. Match can be set to Endurance vs 1 car at a time or a Royal Rumble style (Max Cars Endurance). Then you, and/or your opponent choose your Vehicle, Faction, and Machine Gun variant. After selecting your vehicle setup, loading screen appears, with the Level name & variant listed underneath. AI Bots are chosen randomly. They do not ever use Darkside, Talon or Juggernaut.

The game focuses heavily on multiplayer combat, including various multiplayer modes with up to 4 player split-screen, and 16-players online. There are four factions in the game: The Clowns, The Skulls, The Dolls, and The Holy Men, which have been inspired by Needles Kane, Mr. Grimm, Dollface, and Preacher respectively.

These weapons are similar to the machine guns from the previous Twisted Metal games. They never run out of ammo, and are fired by using L2 (default). In the new installment of Twisted Metal, each sidearm can be chosen from a short list of other side arms which have pros and cons to them.

Twisted Metal (2012) has only 4 drivers in the entire game, and they have all appeared in previous Twisted Metal games.

Several promotions were available at launch. They include:

Like previous Twisted Metal games, the d-pad has served as a means to perform energy attacks. Since they began in Twisted Metal 2, they have grown in number but generally included freeze missile, shield, mine, and rear fire. In the newest installment the d-pad can no longer be used to steer your vehicle (under default controls) and it is used instead to fire a few quick advanced attacks. The D-pad attacks that require you to hold Triangle button must be unlocked in story mode. The default attacks are as followed:

There are more than 30 maps, all of which take place on these 8 battlegrounds.

Split Screen: Two players may play the campaign mode co-operatively. The game can support up to four players in deathmatch.

Online Multiplayer: Like Twisted Metal: Black and Twisted Metal: Head On (PSP), this installment has online play available. Complete with a reward and ranking system (which is included if connected to the Server during playing the story mode), and a easy-to-start interface, this installment easily holds the best Online Multiplayer feature to date. A companion may join via split screen, allowing you to both play online. A recent software upadate was released to improve the initial online errors. The update targeted online playing and connectivity issues. The fix allows most people to join a game easier, and less people get disconnected from a match.

LAN Multiplayer: Twisted Metal (2012) also includes an extensive LAN feature, which allows players to connect up to 16 PlayStation 3 consoles over a local area network. Four players may connect to a single unit, although the maximum amount of players allowed is still 16 (for example, 4 PS3 units may support 16 players).

An Internet connection is not necessary to set up a LAN game, although other hardware will be required (ethernet cables, a switch, and a router), and the games and PlayStation 3 consoles will need to have the same versions and updates, respectively. 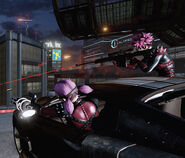 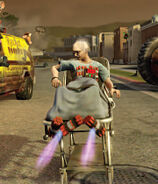 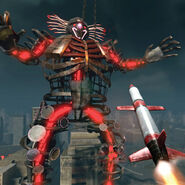